A Completely Unbiased and Comprehensive Guide to Selecting a Investment Adviser

May 17, 2020
"It is much more profitable to sell advice than to take it."  - B.C. Forbes      I was recently talking to a potential client and it was evident he was having a difficult time choosing whether to hire me or another investment adviser. It made me think about the fact that most people have no idea how to choose a good investment adviser. In fact if you know enough to choose a good investment adviser you probably know enough to manage your own investments and therefore have no need of an investment adviser. Since I am an investment adviser I cannot offer any objective advice on how to select one (the title of this blog is meant to be humorous), but I can, and will, offer my completely one-sided, self-serving opinion. Whether you agree or disagree will be mostly a function of your pre-existing beliefs, and if you can prove me wrong, or right, with well reasoned and researched arguments you probably do not need me or this guide. If, however, you like this post and are looking
1 comment
Read more

May 16, 2020
In my last post I discussed the potential for international diversification to reduce volatility. As we saw, the data is inconclusive at best and over recent years international diversification has actually increased the worst kind of volatility. In this post we'll analyze the potential for international diversification to increase returns.      It is worth noting that the UN recognizes 195 sovereign countries BlackRock has 267 non-US iShares ETFs, with the ability to invest specifically in 42 individual countries. If you want to index Poland or Argentina iShares will do it for you -- expense ratios are in the 50-60 basis points range. We can be fairly certain that in any given year the US will not provide better returns than every one of those 42 countries. So "diversifying" with the right country will always provide better returns. However, investors have no reliable way to pick the right country. For the purposes of this article, when I refer to international i
Post a Comment
Read more 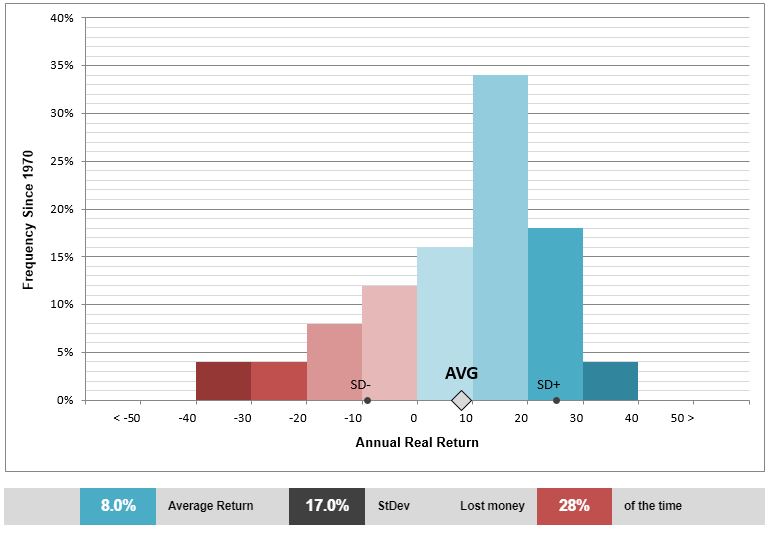 One of the most basic questions of investing is what percentage of one’s assets should be invested in international stocks. Investing in international stocks has two potential advantages, lower volatility and higher long term returns, but neither is certain and the opposite could occur. Over the next couple posts we’ll look at both of these potential benefits, attempt to evaluate the risks and develop some heuristics for making wise asset allocation decisions. The idea that international diversification has lowered volatility is a central concept of Modern Portfolio Theory and is well supported by a number of studies. This is because, over the periods tested, although international markets underperformed the US stock market they tended to zig when the US zagged and therefore a combination of US and international stocks yielded a higher total return on investment with lower volatility. However, most of these studies focused on 30 or 40 year periods in the mid to late 20th c
Post a Comment
Read more

4% of the US Population Chooses the President 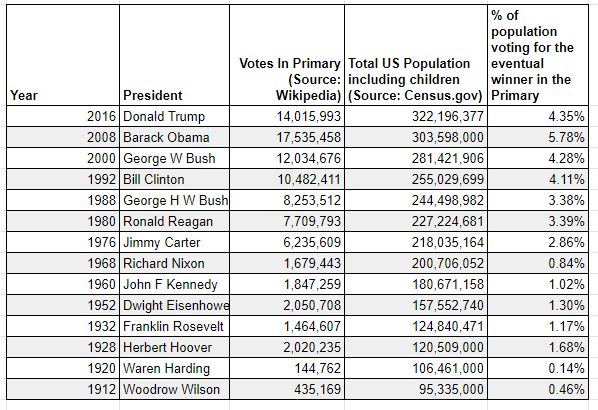 In the United States we have a representative democracy. The president is chosen by the people and therefore has a popular mandate to rule and reign, or something like that.      This little chart shows the number of votes received in the primary election by each president that was not an incumbent since 1912. Because most voters will only vote for one of the two major party nominees the primary is actually more important in selecting the president than the general election. As you can see a pretty small percentage of the population actually gets the president they wanted from the beginning.       I only looked at years where an incumbent was not running or did not win. The extremely low percentages at the beginning of the time period are due, I believe, to the fact that primary voting was not wide spread until much later in the century, but I am by no means an expert on the history of elections. I also used total population which includes persons not eligible to vote. I did
Post a Comment
Read more

Vanguard is Wrong About International Bonds

March 30, 2020
Anyone who has talked to me about investing knows that I am a big fan of Vanguard. My wife and I have all our accounts with Vanguard; all our children, including our three week old, have Vanguard accounts; and every member of our family has a Vanguard hat. Vanguard is the first, and, in most cases the only investment company I recommend. They are the pioneers of low cost index funds and they still do it as well or better than anyone else. Anyone who talks to me about investing also knows that I believe investing should be as simple as possible. Which is why I’m attracted to Vanguard Target Retirement funds and LifeStrategy Funds.  Target Retirement Funds are a common offering in many 401k plans. They offer a single fund with a diversified asset mix which automatically adjusts to become more conservative as an investor approaches retirement. An investor simply chooses the Target Retirement Fund closest to their planned retirement year and focuses on saving as much as they reasonab
Post a Comment
Read more

Three Things to Focus on When Markets are Volatile

March 23, 2020
Last Friday the US stock market as measured by the S&P 500 closed at $2,304.92 down 32% from its high exactly 30 days earlier. The last 30 days have been marked by extreme volatility stemming from uncertainty about COVID 19 and the government's response. As with all market crashes, it is impossible to know whether or not we have hit rock bottom. Watching the wild swings is exhilarating for some, terrifying for others. However, investors need not be powerless victims to the vicissitudes of the market. By focusing on their costs, asset allocation, and savings rate investors can proactively control those elements of investing that remain within their circle of influence, and reduce the stress caused by market volatility.      "In investing, you get what you don't pay for." That classic quote by the late John Bogle, the late founder of Vanguard and greatest advocate of low cost investing, underscores the mathematical fact that any money an investor pays in fees
Post a Comment
Read more